Thought for a Stude intake manifold..!

Thought for a Stude intake manifold..!

Lookin to see what the volume of the plenum is on this manifold. If the volume isn't too large, or can be easily filled in a few places, make a single four top... Waiting for an e-mail answer to my question.
https://www.eddiemotorsports.com/produc ... en-100.htm

Might be an interesting fit with the adapters. That big ugly block on the back needs to go though..!

It's similar in price to the big Offenhauser cross ram, but I know that that volume is way too large, I had one. I did a lot of filling in one of those years ago and ran it on a 350 in my 56 Chevy for 2 or 3 years on the street. Fun times.
Any large plenum (tunnel ram, cross ram) manifold should have a similar plenum volume as the engine cubic inches.

A "plan view" dimensional drawing would be good to have. I have considered the cross ram to use with the adapters but my concern is the distributor clearance.

I wasn't too worried, the Chevy has a rear distributor also.
But it will be something to verify.
I was hoping they might be showing off their wares at the Grand National Roadster Show this weekend. I didn't see them.
Hope to make it to their shop in the next week or two.

Well, I sprung for this manifold (Jegs sale). Looks like it should work real well ports with Jons adapters.
Needs some interior reworking around the end ports, but not a huge thing. Just need to build a single (or dual?) carburetor top for it.
It's also got a small amount of "choke" in the (gasket end) end of the ports for some reason. Should also be easy to fix.

Gonna need some heavy mill work to remove the EGR mount on the back. The front mill work should be a normal thing to cut off.

Should be plenty of room for a Stude distributor. Will need to relocate the vacuum chamber, radially wise from the OEM location. No large HEI's need apply though.

That's going to be an interesting project. Since it's designed as a low profile replacement, it might fit under Stude hoods.

If height were no problem, the new AFR looks interesting. 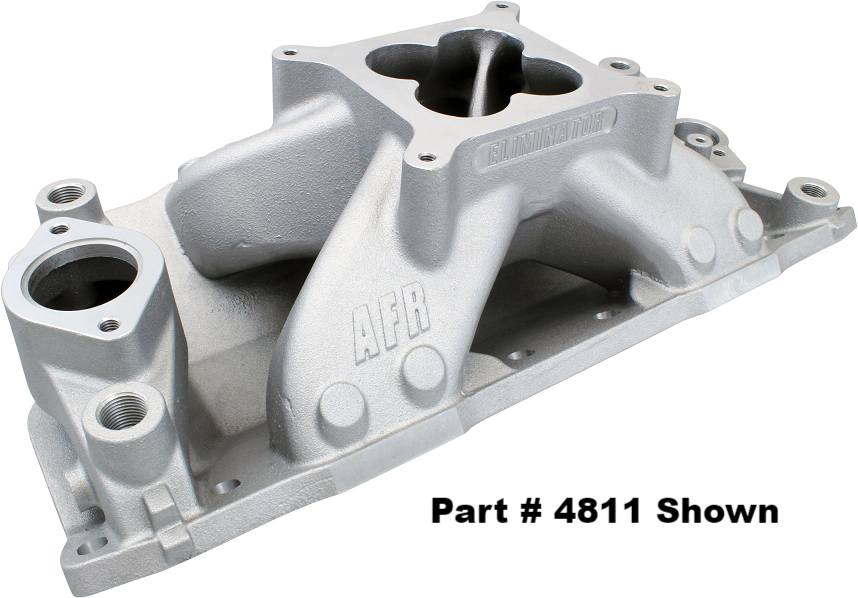 Yea, I wanted something a different and that all the runners are the "same" length. The runner size is the same as the adapter plate ports. BUT, they need some..."matching..!"
These are listed as a 6000rpm manif. That MAY...be because of the choke/restriction just before the gasket. As I noted, that's pretty easy to fix..! Could also be because of the throttle body size, vs. the 850cfm carburetor I'm going to use..! Haa..!
The newer / better single plane designs are much better in the runner length respect than older or less expensive models.

The AFR manifold above is slated as a 3500 to 8500 rpm manifold, that's a pretty high range even for some of the much higher end Stude engines. As you know, a LOT of rear gear and a lot of first gear/converter will be required to use that properly.
And I'd guess that the runner size is much larger than Jons plate ports, ending up being a big "funnel" after being match ported. Not sure that's a good thing.

I also was looking at AFR, but for their plastic manifolds.
But...I don't see them listed any longer.!? I'll have to call them.

Mike, you and I are sometimes thinking of being able to drive this stuff on the street. Of late, I've been convinced by guys with hundreds of dyno tests that it's nearly impossible to overcarburet/manifold for max top end horsepower. There's no way most under-400" engines can use all the flow of the 850 - 1050 CFM carbs or a 2 x 4 tunnel ram, but they always make more horsepower on the dyno and go faster on the track.

A friend of mine that runs a small inch C/ED (Econo-Dragster), may disagree some how "economy" the class really is.
Back when I was helping him (when he lived on the coast side of the San Gabriel Mts.) with his small Chevy powered car. 278" as I recall. We spent a "few" weekends testing at the old Orange County Drag Strip.
Four weekends all together.
1. Cams. Three cams. Two had the same values except for overlap, and the third was just different.
2. Manifolds. Two Hogan's and one ported Edelbrock.
3. Carburetors. Three different sizes
4. Combining the best of the previous three. Plus some other mixing and matching.

While the car was not a record holder, it was only a few thousandth's off. It was fast for the time.
With each test session, different sized tires were used (depending on tire slippage), different ignition timing was tried, jetting...well, is jetting for the day..! The two equal cams was enlightening. Huge low end power for the tighter lobe center version cam, but it dropped off drastically at about 1000'. That's the combination that "needed" a larger, wider tire. The manifold day, as I recall we even changed the trans. ratio with a second 2spd.

We changed parts, tried to optimize each combination as best that we could in a 12 or 14 hour day. Got there at gate opening, and was actually kicked out one night about 11:30ish.
What we found with Scotts extra parts and the borrowed parts he collected, with the exception of the intake manifold, all the parts he was using provided the best E.T.'s, and third best MPH. The manifold that worked the best was a Hogan that had shorter runners than the other two.

Carburetor wise... The class has/had a CFM max. At the time it was 750 as I recall. We tested larger carburetors just as general experiments. An 800 and an 850 Holley. All three basically stock per the rules. No hard parts changed, no machining.

Take a rough guess which carburetor worked the best ? The one that was per the rules for the class...the 750..! Only by a VERY small bit...but.

All in all, Scott didn't buy any new parts, The better manifold, while it produced better E.T. numbers, it was out of his price range at the time.

So while too big a carburetor may work sometimes...not always.

I can tell you a story about a too large a header primary tube on my old Anglia worked and the changes THEY required to be a positive change..!

Rene~ Harger built a steel tube TPI manifold for a Stude.
Weighed a lot and looked quite...industrial.
Never heard how it worked...

Hi, Mike,
I've long wanted to try a Tuned Port Injection on a Stude. It was originally developed for the SBC 305", so it should be perfect.
Think of the TPI as a port fuel injected evolution of the Crossfire. Here's a cross section of a TPI.

That would be different.
It would need to be mostly aftermarket parts though. I don't recall the OEM stuff working all that well.

With the adapters, the sky is pretty much the limit.
With a new bolt pattern, the Chrysler manifolds can work too. They have narrower and taller ports than the Chevy, but some reshaping of the plate port will fix that. I set an adapter plate on a small Chrysler manifold. Not too far off, usable.

The technology is now here..
They are printing titanium wheels.
Why not an intake manifold?

Sounds plenty doable.
Like everything, just takes money.
Just get a good manifold (single and or dual plane), bolt Jons plates on that have been sculpted to lighten them, have it scanned and put on a thumb drive...call the place above, there you go.

I did buy one of the Renegade / Eddie Motorsports cross ram manifolds.
Did some interior cleanup work, hack-sawed off the ends both for the look and the weight saving. The thing weighs a ton. I'll run it thru a mill later to make the hack-sawed off ends look presentable.
I taped the runners closed last night and attempted to fill it with 20 cups of water. That is really close to 299 cubic inches. I probably could have squeezed in the last part of a cup, but my tape work started to leak, and I was in the kitchen, so...

Even though it does measure pretty well plenum size wise, I'm going to fill the deep trough with epoxy, that runs down the center, between runners to help remove any possibility of stagnant air/fuel in the center.

Two Carter 400cfm Carter carburetors will reside on the top of this thing. In making calls to find the little things, I've learned a lot of apparent myths about the AFB and the cfm ratings. Found a guy with a wealth of knowledge, and hard info to back it up.
Aluminum plate isn't cheap. I bought two, one for two and one to hold only one carburetor. Now to fit the plates to the main manifold bottom and open some holes for the carburetors.

The GM TPI would be easily done with my adapters.

JK
You do not have the required permissions to view the files attached to this post.
Top
Post Reply
15 posts • Page 1 of 1