Great job Bill, as Ted said no hope to get to the track around here. As usual nice and smooth going down the track you hit the shifts just right.
Richard
Studebaker Drag Racing You can't beat it.
The 11th annual all Studebaker Nationals Drag Race is Saturday May 25th, 2018 at 9:00 am at Brown County Dragway in Bean Blossom, Indiana. For more information contact Richard Poe
Top

Nice performance Bill. It's a win up to the last 4 feet. (lol).
Top

Here's a couple of vids made on an iPhone .
My buddy only recorded 2 of my runs that day.
They are small , and you may have to click on them twice or so. Flickr can be balky . 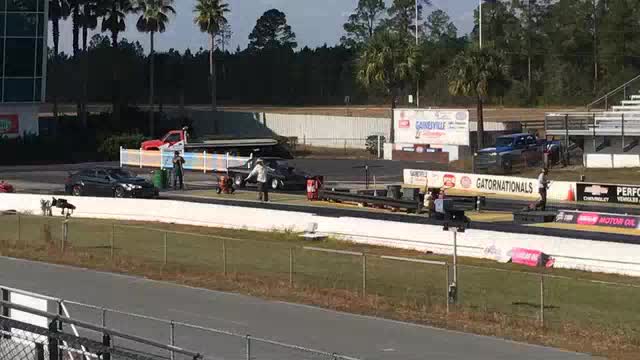 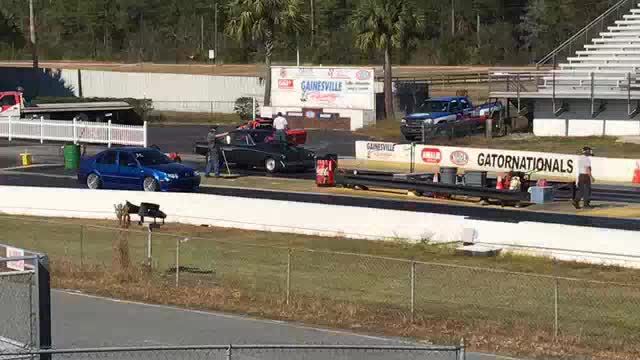 G-Ville run a IPhone by Bill H, on Flickr
If you can't get there in a STUDEBAKER,
it ain't worth goin' .

You get off the line real well making them try to catch up as you run off on your way. Normally aspirated Studebakers seem to have a strong low end.
Thanks for sharing.
Richard
Studebaker Drag Racing You can't beat it.
The 11th annual all Studebaker Nationals Drag Race is Saturday May 25th, 2018 at 9:00 am at Brown County Dragway in Bean Blossom, Indiana. For more information contact Richard Poe
Top

That was the biggest complaint with my 53K. At Fernando I got down to 14.70's and it would flatten out on the top end. Being a A&E mechanic, I took out the old gas lines and installed -6 or 3/8" SS lines and made sure that the through holes in the fittings were as large as they could be. With just that change I dropped to 14.10 and picked up 4 MPH. I also worked on the gas tank fitting, there was a tube inside and it had a rag on it and the fitting brazed to the tank had a hole that was less than 1/4". It is a pain to get a 3 or 4 car jump out of the hole and watch the car in the other lane catch up at the finish line.
Top

When Ted wrecked the CH he was testing the changes he made in his fuel lines. He put the pickup in the rear. Tom's 1964 Commander has a pickup in the rear of the stock tank. The CH was running maybe the best that night it ever ran, too bad it was the last time out.
Richard
Studebaker Drag Racing You can't beat it.
The 11th annual all Studebaker Nationals Drag Race is Saturday May 25th, 2018 at 9:00 am at Brown County Dragway in Bean Blossom, Indiana. For more information contact Richard Poe
Top

My Buddy did finally send the Video of the 13.993 run against the red Camaro.
I gave up a huge starting line advantage ( concentrating on making a good pass ) , but caught him at mid track , but
his cubes etc pulled him back to me right at the line . 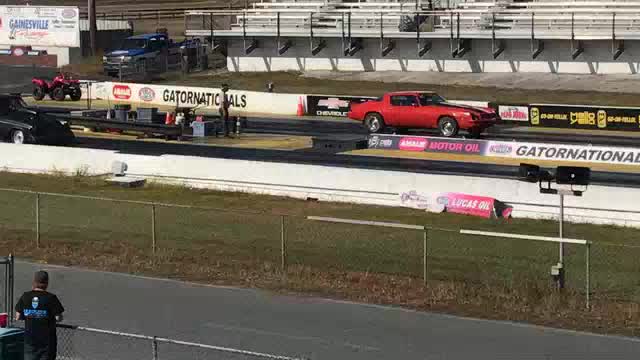 13.9 from stands by Bill H, on Flickr
If you can't get there in a STUDEBAKER,
it ain't worth goin' .

I've been to Tracks twice in 2018 .
First was to Gainesville on January 27th . Not a good day .
Had the Evans intake on , and had installed a Wilson super 1.5" spacer . Tested as usual here at home in my driveway , as much
as possible . seemed ok .
Unloaded at the track , and the car seemed to run a little " off " , just there in the pit , but seemed to improve a little , and so I made a run.
The Et was off by about 2/10ths and speed down about 3 mph . The engine temperature seemed a little hotter than average , as well.
Came to pit , looked it over , and made another run . The engine shut off at the finish line !! I coasted off the track , and after waiting a minute or so it fired up , and made 200' , and died again . Pulled it back to the pit via ATV .
I and my helper both needed to get back to Daytona at a reasonable hour , so we got help and pushed the car up on the trailer and headed home .
(Gainesville is a 104 mile trip from my house .) My helper lives on a bad dirt road 80 of those miles back , and after dropping him off , I was
heading back out to the paved road ( about 2 miles ) , and the badly rippled road shook my removable fender off of the trailer , and removed the race car driver door mirror , and dented the door a good bit ,bending the Stainless in the process , and bent the fender too ! I was traveling at a slow pace , so.....
So.... when I arrived home , the car fired up , and I saw only 3.5 lbs fuel pressure . I think that the little pump that i had been running was dying , and on Run 1 the engine was running lean at the end of the run causing the elevated temperature . On run 2 the pump itself was probably running poorly due to getting hotter , and just gave out until cooling down on the 2.5 hour trip home . It was a stock GM inline AC pump , and old when I originally put it on.
Subsequently , I have installed a New Holley Blue pump , and also a new fuel pressure regulator , and replaced the elements in both of my fuel
filters , one an AC canister between the fuel cell , and the pump , the other a Jeg's after the regulator and right at the carb.
Also , I made some new brackets for the Throttle linkage and springs , as I finally noticed that with all of the various intakes , spacers etc , that I have done , and now the 1.5" spacer, that the geometry had slowly become bad .
I also made a better bracket at the pump area under the rear of the car , to hold the braided lines more securely .
I repaired the door , and the trim enough to be ok on a race car .

Place was full of cars , and lines very long , so came on home . Happy .
If you can't get there in a STUDEBAKER,
it ain't worth goin' .

Sweet! Like those 60 ft times, especially run 2 which would have made the best run #3 even quicker. Was that still with the Evans intake? If so it seems to have been your best performance todate. I drove my trailer off the ditch this weekend by accident and screwed up my driveway so I know the sick feeling when things go wrong.
Top

Way to go Bill! You should be really pleased with those times and speeds, especially for the first time out; even if it were mid season. 1.8's in the sixty foot is awsome! Look forward to seeing more as the season goes on. Will be about a month before strips open here in Indiana.

Good luck and keep on having FUN>

Looks good, keep us updated. I like that 60" and your 1/8th mile times and speeds are strong.
Good work
Richard
Studebaker Drag Racing You can't beat it.
The 11th annual all Studebaker Nationals Drag Race is Saturday May 25th, 2018 at 9:00 am at Brown County Dragway in Bean Blossom, Indiana. For more information contact Richard Poe
Top

So here is the progression of the intakes and the linkage too.

However , I think that I may attempt to go and run next time with the Evans w/o spacer . That did produce the 13.99 late last year , and it is possible that the fuel pump problem was beginning , but not in full effect yet . 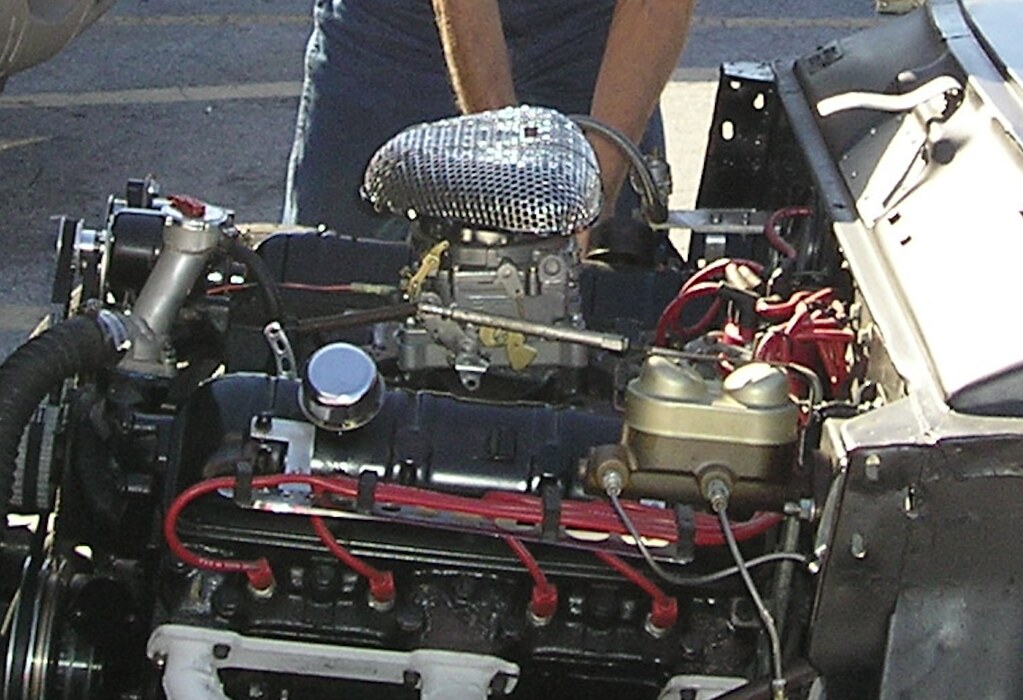 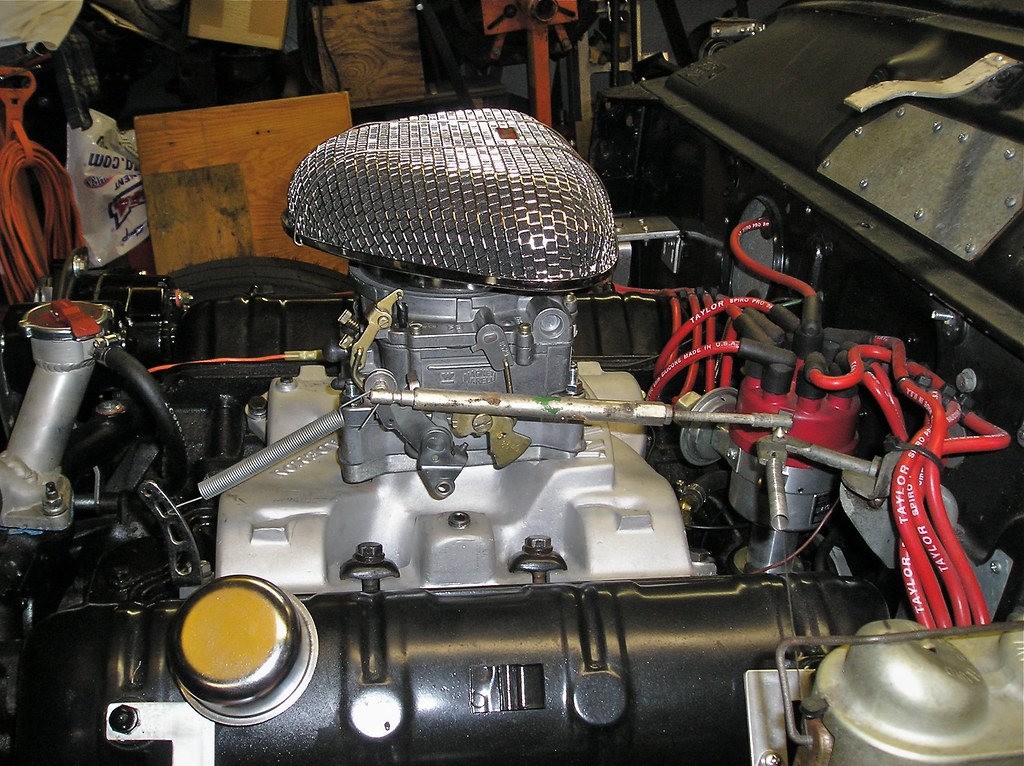 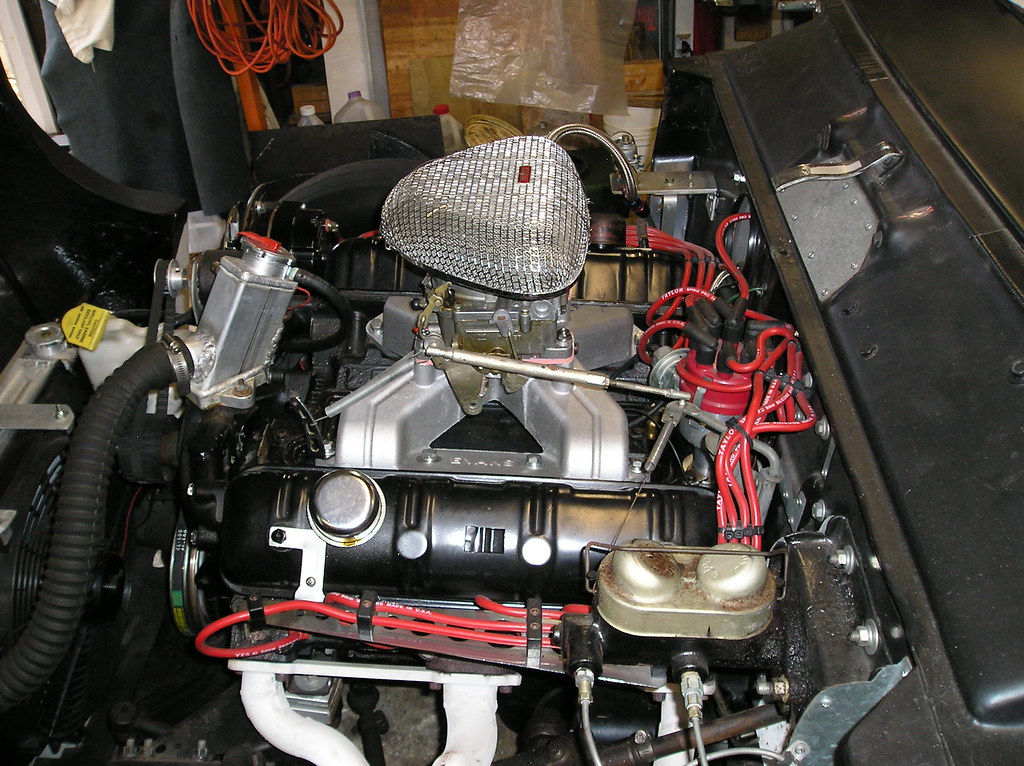 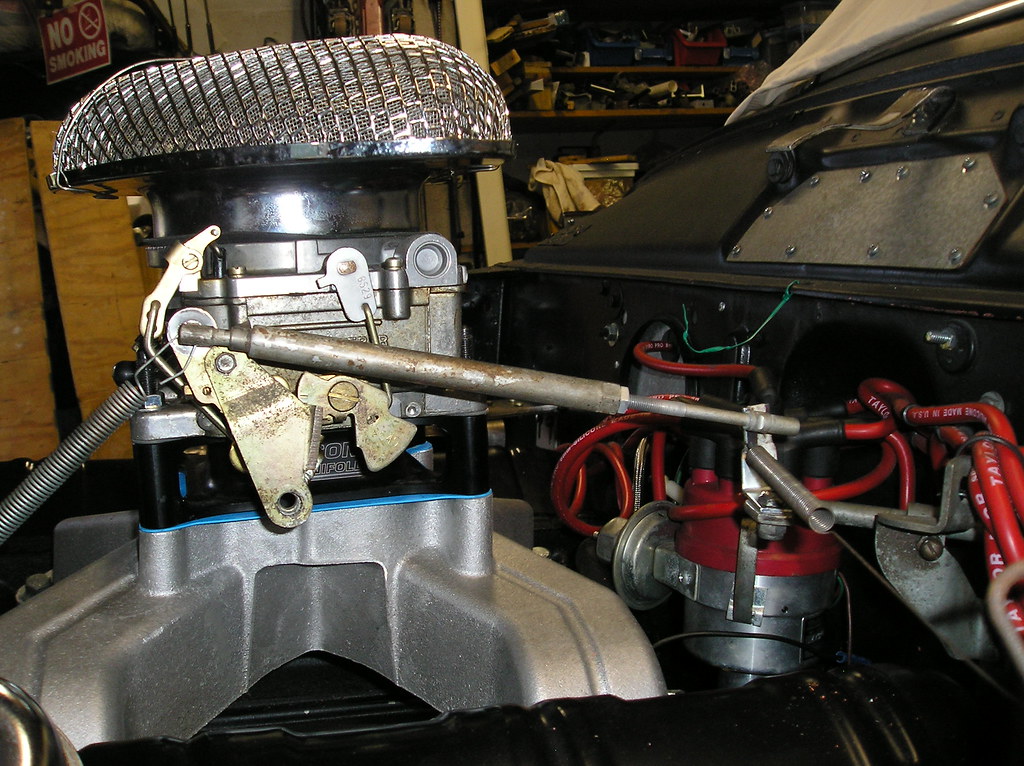 Evans linkage no brackets copy by Bill H, on Flickr 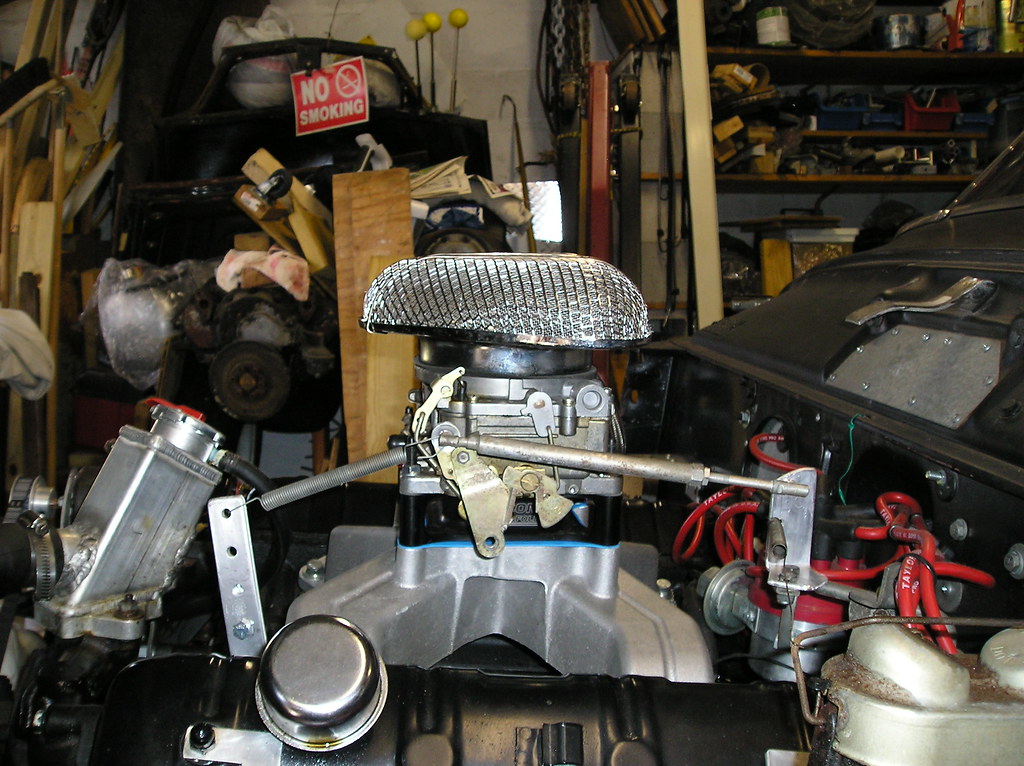 Linkage for 1.5&quot; spacer by Bill H, on Flickr
If you can't get there in a STUDEBAKER,
it ain't worth goin' .

https://www.youtube.com/watch?v=JBg-B5J ... e=youtu.be
If you can't get there in a STUDEBAKER,
it ain't worth goin' .

Well , here on Friday the 13th , 2020 I had a good day , despite the World going through the Covid 19 crisis .
Since my trip to the Gatornationals was cancelled by this , my day was spent FINALLY getting Ol' Skeeter running and moving under its own power, for the first time in 10 months . My Step Son pitched in , and helped a great deal .
The pics show a brief view of what has been done . I replaced the frame from about 12" behind the cowl , with new Sq. tubing , a-arm suspension
rack and pinion steering , a new Gigantic radiator and fan , etc etc . Quite a project for such as me . Lots of loose ends to tie up , but I am happy right now . 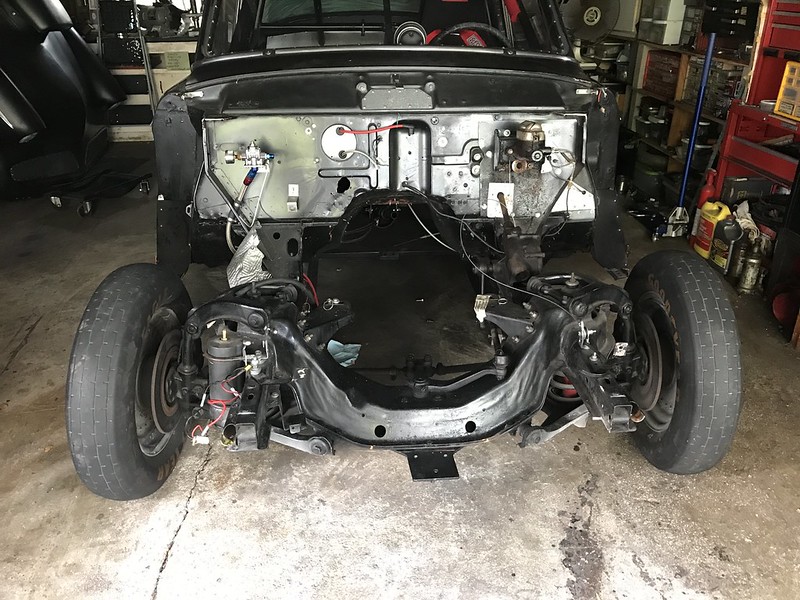 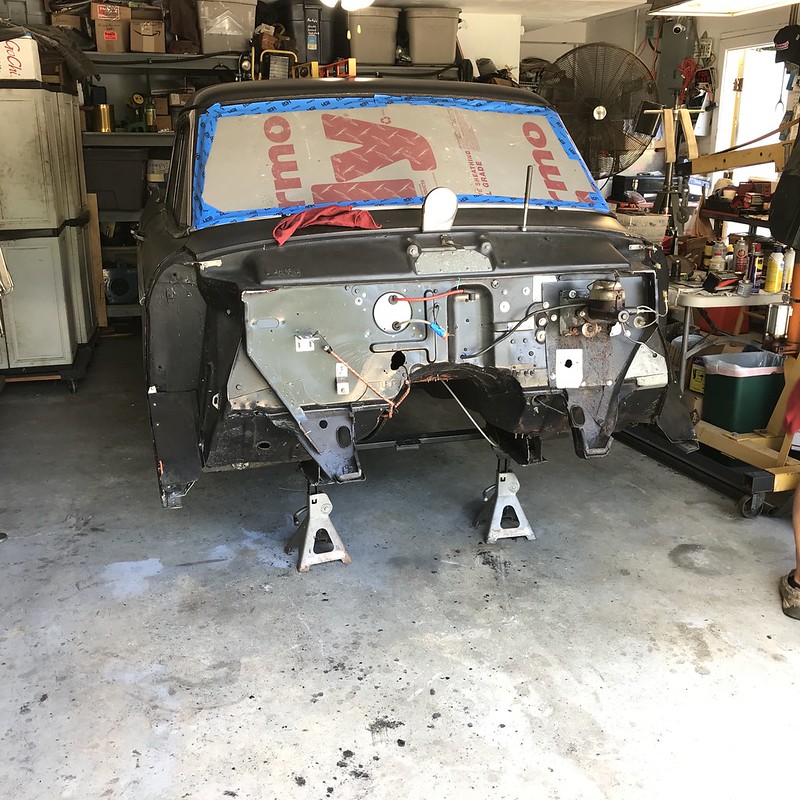 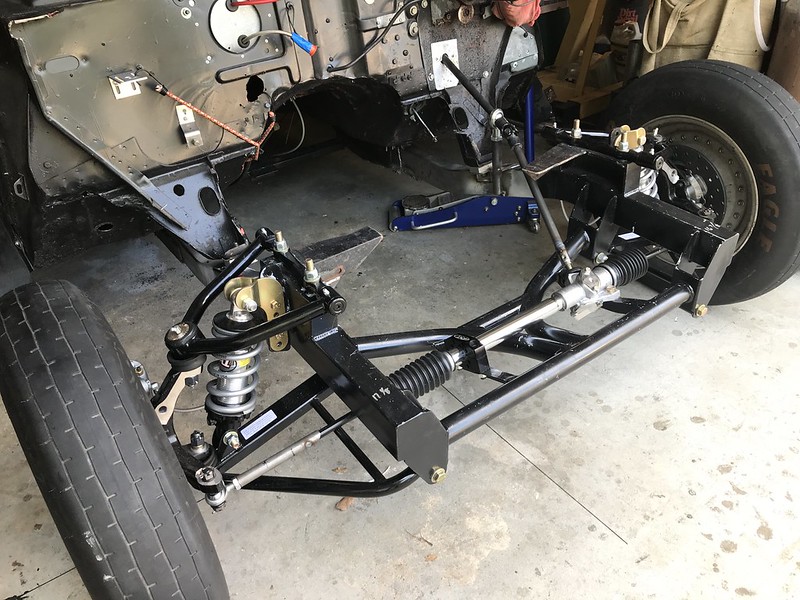 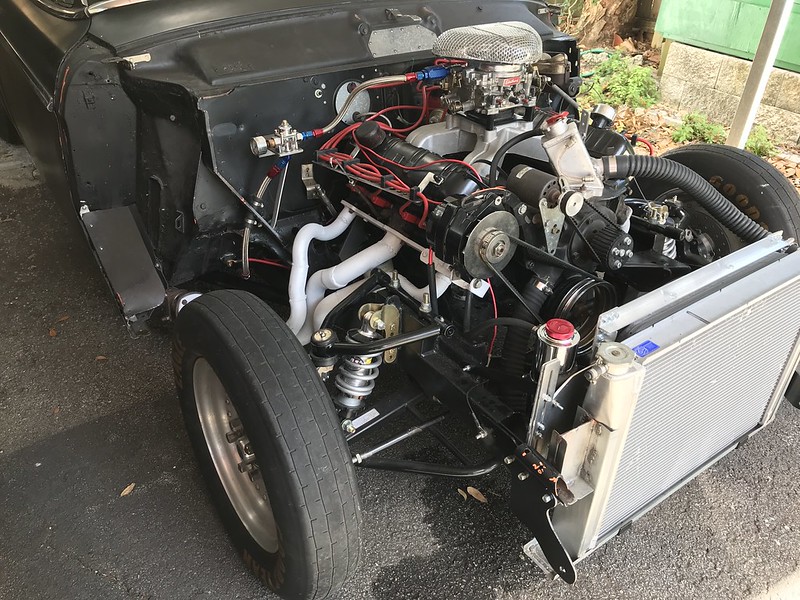 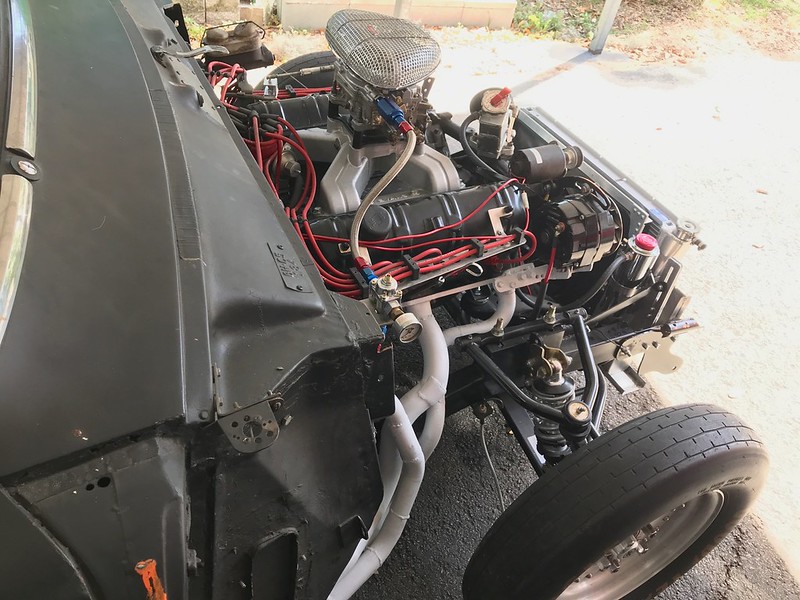 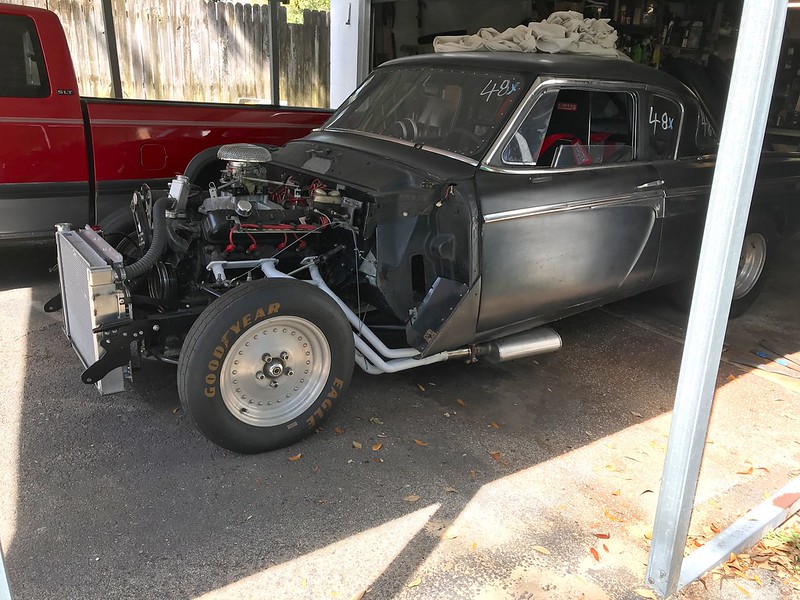