Fantastic, looks like a pro built race car. Great job all around. You took the time to do it all at once. Looks lower, that will help cut the ET.
Richard
Studebaker Drag Racing You can't beat it.
The 11th annual all Studebaker Nationals Drag Race is Saturday May 25th, 2018 at 9:00 am at Brown County Dragway in Bean Blossom, Indiana. For more information contact Richard Poe
Top

Wow Blll! You sure been busy this winter. Would have taken me at least a whole year to do all you did. Looks great. Thanks for the update. Keep us up to date on your racing. Will be at least a month before any strip are open up here.

Oh, that's COOL! Looks way lighter also as well as roadholding might be up a notch!
In that direction I'd do some roadracing too...
Top

Been doing a lot of little things to the car for the last month . Today was a test to check things out before putting the nose back on .
Added a LineLock , reinforced the motor mounts , added an overflow jug after the Surge tank , had a major FUBAR with the Trans. to deal with .
It is rebuilt , and has the good stuff in there . I brought it home , installed the Eng. / trans etc , and after adding some fluid to the trans. a weeping appeared. Turned out to be the 1-2 shift Accumulator o-ring .
The shop of course did not run the trans as it was a handed back to me for installation .
It was very difficult to reach ,from the bottom side , so I ended up cutting a good sized access hole in the floor / tunnel . I still could not get the piston / cover assay to install , and the snap ring is a bear also , so finally the shop sent t guy out , and together we were able to do it . So here is a video of today . 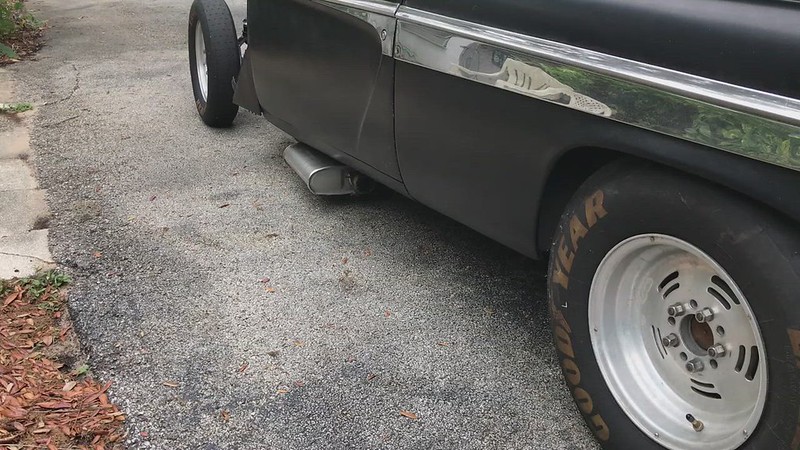 
Now I've put the nose on , and It'll need a few tweaks of course .
If you can't get there in a STUDEBAKER,
it ain't worth goin' .

Always cool to see your car!
Is it -56 tail lights you have? Also wonder about the oil filter; I saw it's in the same place as on MoPar engines, is that original? (I've only seen them on top up front before.)
Congrats again to a nice work on the front suspension!
Top

Bill,
The Skeeter Hawk looks really great and light. I hope you can get it to the track soon.
Richard
Studebaker Drag Racing You can't beat it.
The 11th annual all Studebaker Nationals Drag Race is Saturday May 25th, 2018 at 9:00 am at Brown County Dragway in Bean Blossom, Indiana. For more information contact Richard Poe
Top

That is the late model Full flow oil filter location . This is a 1963 block .
I am really not sure about the tail light lenses .
If you can't get there in a STUDEBAKER,
it ain't worth goin' .

I'm with you...
Am bustin' butt to get my shop in order so I can go to a test & tune and put some laps down.
Maybe we should hook up and go together.
Help (hurt) each other out.
Top

Well , I haven't gotten to the track to race yet. tried to go on June 7th , but that was a rain out weekend .
Next real shot for me would be July 5th , but I will not go. This is mid summer heat Hell here in Central Florida .
I do not race at night.
Last weekend , I did go to the track on Saturday , in order to get a drag racing Fix , and to
check out the back road route that I take ( I'd heard of some construction projects nearby ) , and also to see what changes have happened at the track itself . This was a daytime event , a Quick 32 race . These are serious hard core Bracket Racers , mostly rear engined dragsters ( not all ) , and also
a bunch of Jr, Dragsters were there . About 45 Quick 32 cars , and total of about 80 cars at the track . Hope one of these links works .

I stayed for about 1.5 hours and came on home .
I fire my car up , and run it up and down the driveway here at the house on about a 2 week schedule , and also keep my trailer mover (aka old Cub Cadet) on the same schedule .
So for the rest of the super heat season , I'm doing some garage renovation . Tucking all of my stuff into a very small yard , and pretty small garage
is quite a struggle on its own . Keeps an old fart going .
If you can't get there in a STUDEBAKER,
it ain't worth goin' .

Time and weather better . It was 85 deg. today . Finally to got to track to check out the changes .. Mixed results . A front was coming , but I went hoping to beat the rain.
Main thing was to shake the car down , as a bunch of new stuff , Frame , suspension , brakes , Steering , total cooling system , trans. mounts etc .
Made 2 runs , all seems ok on the above items , but engine was not running well . Backed out way early to make sure of brakes .
Carb. likely problem , but I'll find out later .
The Front was coming , so , after taking a quick look at the engine for any obvious Fubars etc , decided to make another shake down run and stay in it longer . Engine still not happy , but it did go about 88 mph , which worked the brakes harder , and they are ok . Handles differently but well .
A sprinkle came upon the track ( very light ) , but they stopped for a while . I could see more rain gathering as the front approached , so I loaded up and came home . A couple of quick showers on the way , but pretty good . They actually ran an Air Show at the Sanford / Orlando airport , between the scattered showers .
After unloading the car etc ( quite a process ) here , a rain came vigorously , and I got 1.6” and a good bit of wind . Mission mostly accomplished . 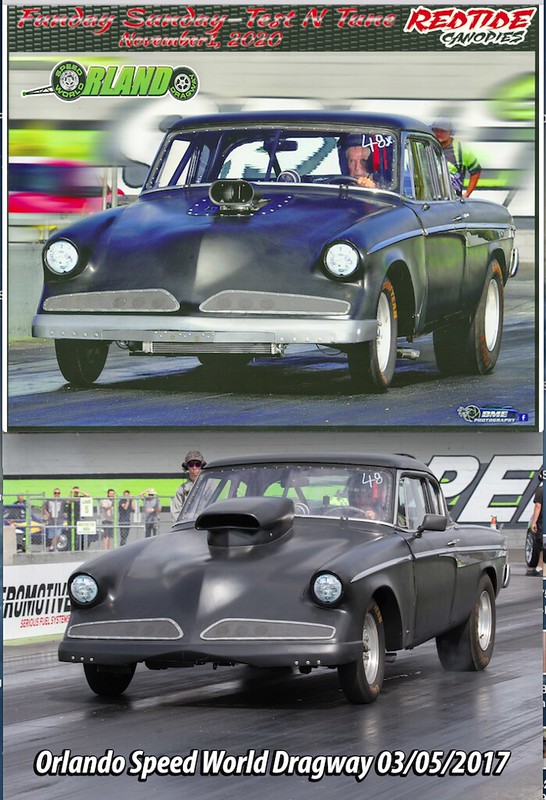 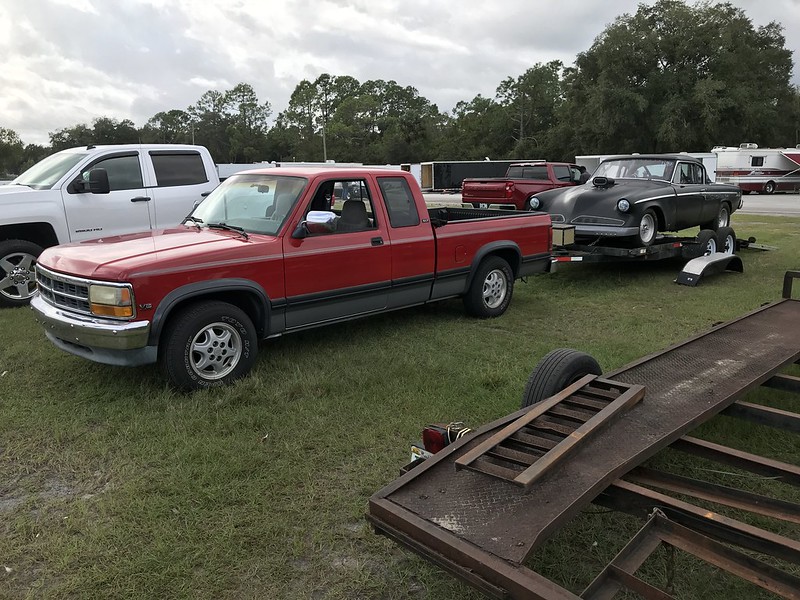 Progress!
You are wise to take it step by step.

But the most important thing is you are out there.
Top

Here's a video with a hopefully happier engine . An odd carburetor problem seems to have been the issue .
I've checked the fuel flow , and I've removed the filter between the regulator and the carb , as I have a canister
filter between the fuel cell and the pump. Fuel flow is about 1- 1/4 Gal / Min. after the regulator , so that's what the Carb. sees .
I've also increased the Accel. pump shot , and raised the level in the Carb. up about a 1/16" or so . Checked the Carb. out otherwise .
Had a very low fuel level most likely due to a float hanging up and keeping the needle closed on the feed side .....the other needle couldn't keep up .
Plugs were amazingly lean ( and some were totally white) before all of this . This all came to be during the long no start time while I did the
chassis improvements . Also a problem with the Coolant Recovery can happened , The down tube came out of the fitting ( it was just shoved in there
with no real clamp at the factory apparently ) and that prevented the coolant from being drawn back in . Took a while to find that . It is now epoxied in place , and working ok . Added a PCV system with an Air / Oil separating can , and only track testing will reveal how all of this works .....

https://www.flickr.com/photos/hollyhill ... ed-public/
If you can't get there in a STUDEBAKER,
it ain't worth goin' .