Forgive a guy who don't know much about anything, but what's the small beltdriven cylindershaped thing beside the alternator?
Migty nice to see your posts Bill!
Top

That is an electric motor that turns the water pump and or the fan.
Richard

Well, here it is April of 2021 already , and not a lot to report .
Since last November's trip to Orlando , I have been to track only once , and that was a poor outing .
That was in January at Gainesville . I thought that I had corrected the carburetor issues , so went there for a TnT on a Saturday .
Turned out to be one of the coldest days of the year , and it was miserable .
The air temperature stayed in the mid 40's all day , a stout wind , and a heavy grey sky , so no comfort there . Bah .
The car again ran badly , and so we at least used the opportunity to check out my winch set up and then came home .
Since then , I have rebuilt 2 carbs , changed intakes , installed ( finally ) a proper Recovery Can in the cooling system , and made a bunch of
launches here in my 155 ft long Driveway / test strip . Plugs observed many times ( only of course a general guide of overall mixture at best )* .
* I'm really only " reading" the idle system when I do this but I want to make sure that the carb is not way off . When I launch here I can't really
lay into it , so track testing is my only recourse . Carbs both seem ok now .
I plan to go to Orlando on April 18th for a TnT , although weather is not looking promising right now .
Here are pics of my work . The recovery can that was previously on there was too small . I bought this Canton Recovery can , and the capacity is
almost 2.5 times a much . It seems to be working quite well , and has room to spare . I like a closed system , and the tracks do too .
I also have removed the EVANS INTAKE , and re-installed the MORGAN QUADEMON intake .
Both are aluminum , the Evans is single plane , the Morgan is dual plane . I now have the Wilson 1.5" Spacer on the Morgan . It is a 4 hole ( tapered )
extremely light weight unit . 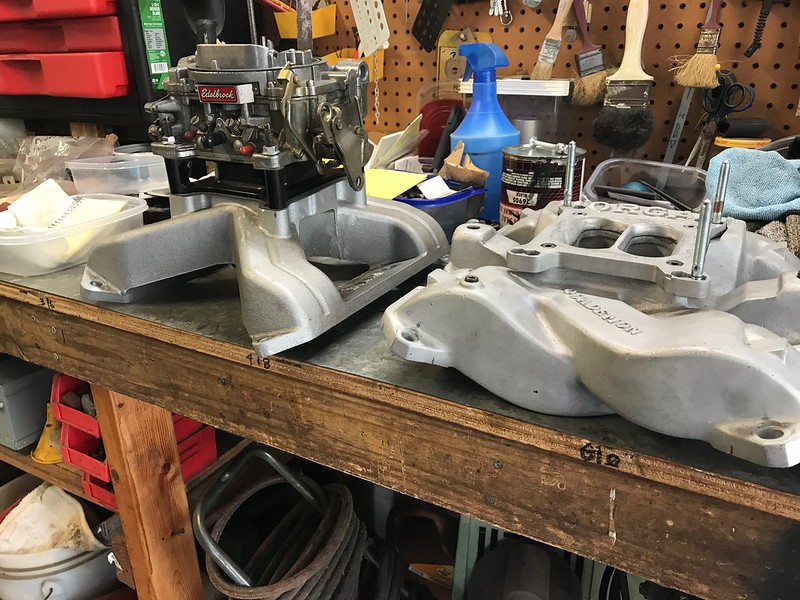 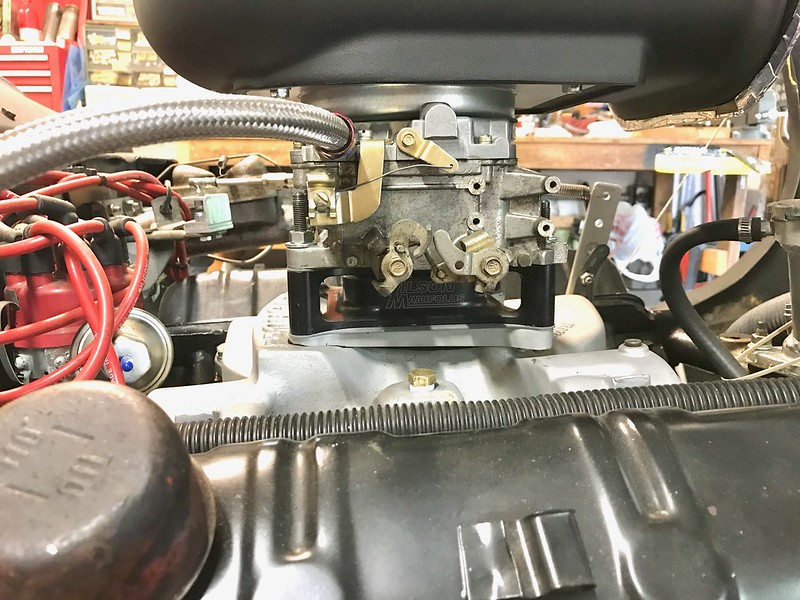 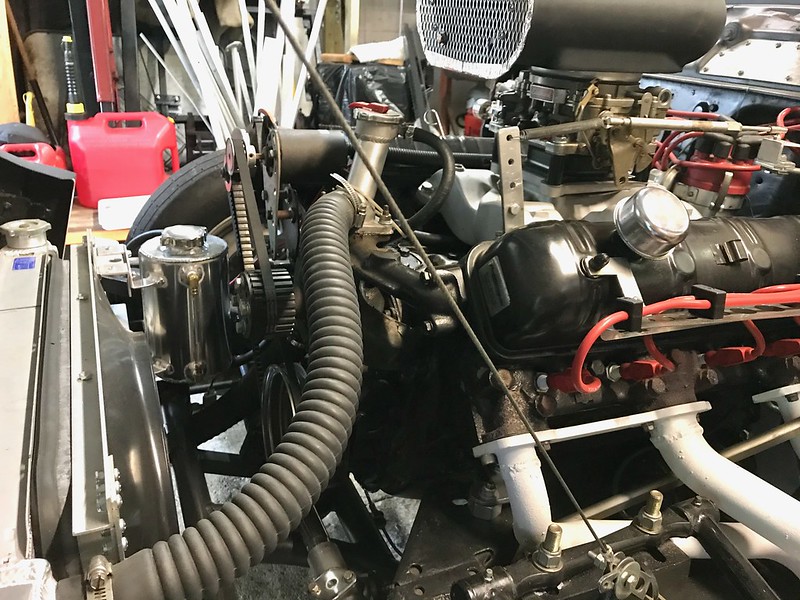 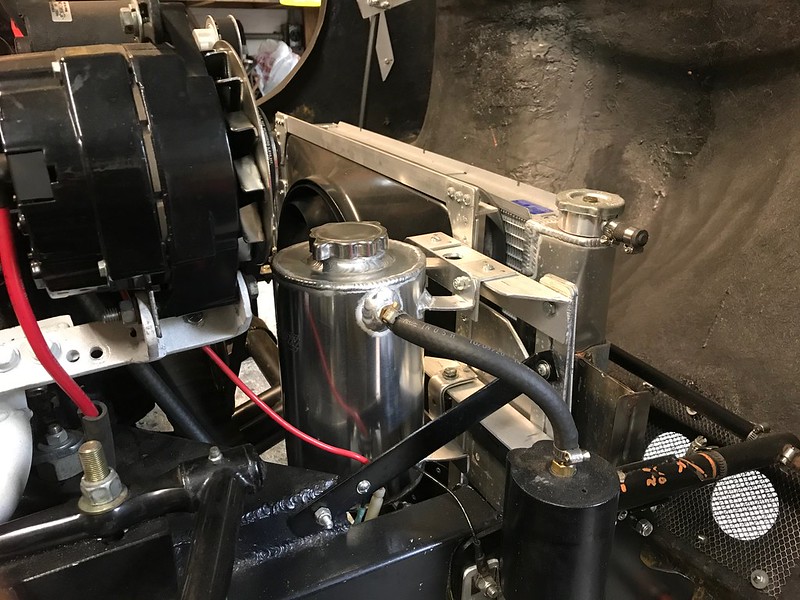 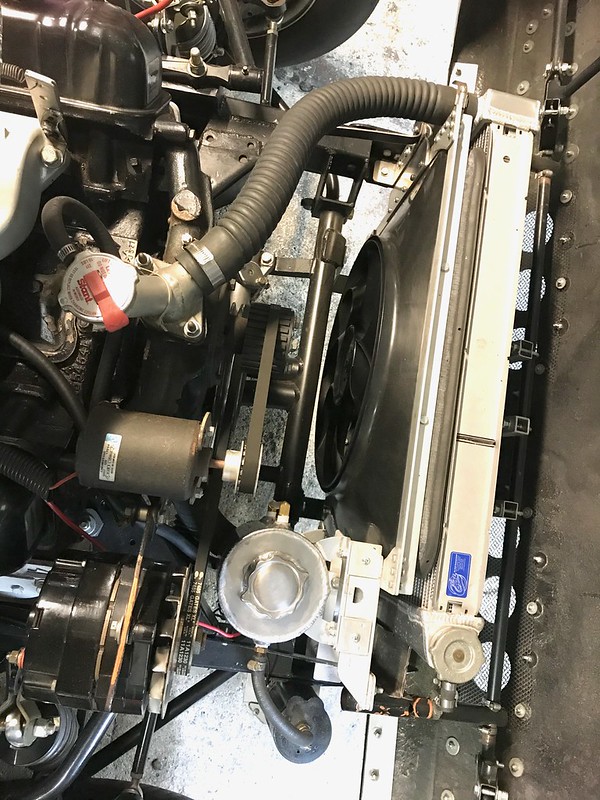 Cooling system April 2021 by Bill H, on Flickr
If you can't get there in a STUDEBAKER,
it ain't worth goin' .

Bill,
I hope you get to the track and work this out. I think you know that we are always working to find the best tune or correct some problem here or there.
We do it the old fashion way, work it out on your own we don't have a Summit or Jegs to call and order a bunch of parts some engineers have put together in some package deal. Where's the fun in that? Keep us updated.
Richard
Studebaker Drag Racing You can't beat it.
The 11th annual all Studebaker Nationals Drag Race is Saturday May 25th, 2018 at 9:00 am at Brown County Dragway in Bean Blossom, Indiana. For more information contact Richard Poe
Top

Mother Nature won the race. We've had intermittent rain , since last Friday .
Next chance to go will be May 2nd .
If you can't get there in a STUDEBAKER,
it ain't worth goin' .

If you are interested in playing with any SBC intakes I would be willing to lend you a set of my adapter to experiment with. PM me if interested.

Jon Kammer
You do not have the required permissions to view the files attached to this post.
Top 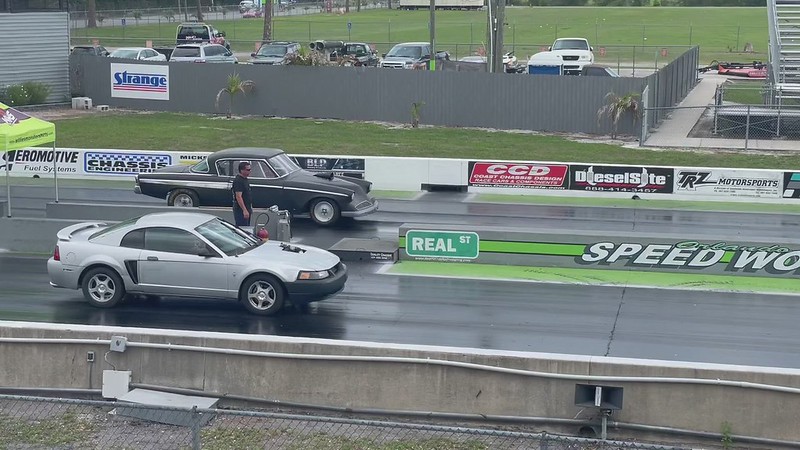 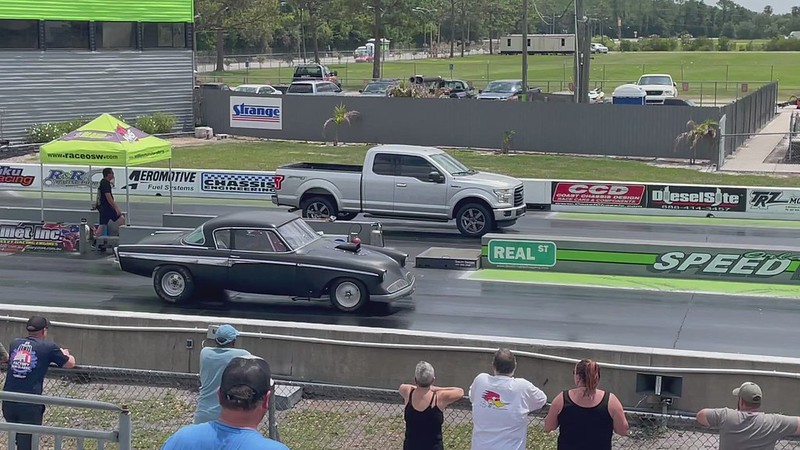 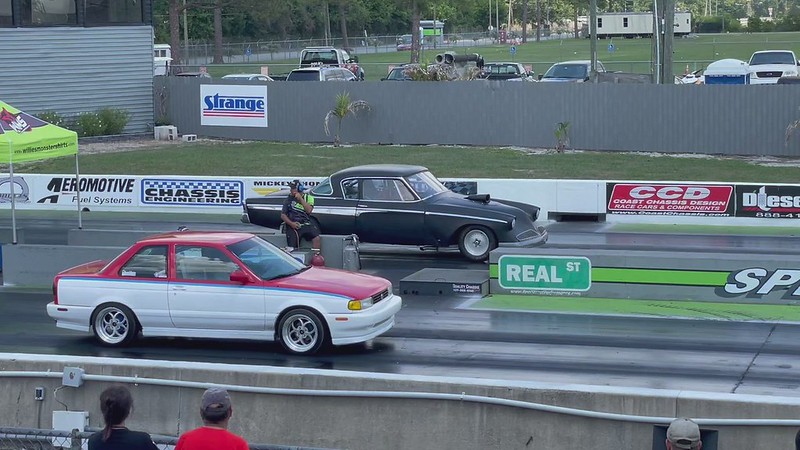 I sure LOVE to read that a Studebaker-engined Studebaker wins every race!!!
& it's always interesting to read your posts, to bad you don't have an enough long driveway to test properly.
Is the track one of those shorter/"half" ones that seems to be normal in the US these days?
Top

This is the full 1/4 mile .
There are 3 standard distances in the US drag race scene .
1/4 mile , 1/8 mile , and for the Nitromethane cars 1000 Ft.
The shutdown distance at some tracks dictate the 1/8th mile only . Many bigger tracks run both distances depending on the type of event
being run . Even at Orlando , most of the Pro Mod / " outlaw " / etc events run 1/8th . Those cars may go as high as 230 mph + in the 1/8th .
They also are skating on the edge of disaster , so the 1/8th distance makes sense .
These T-N-T events that I go to , are slower overall cars , so the 1/4 is mostly used . Faster cars can run then , but they either cut it off at the 1/8th
or take the shot at the big end . Orlando has reasonable shut down distance .
Personally , I would like to see a new standard at 1000' for all , and as you can see on my time slips , they do show an ET at 1000' . Add speed beams , and all would be the same . That automatically gives the track 320 ft. more shutdown distance .
Here's my Time slips recently . 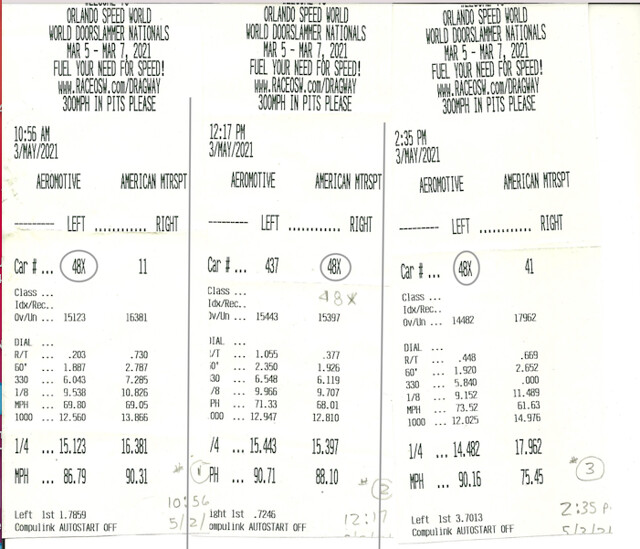 Bill,
I have been busy getting ready for the May 29th Studebaker Nationals drags here in Brown County, Indiana or I would have posted earlier. Lots of phone calls and we have lots to do.
Your description of the way tracks are now running their classes is the same here.
I have been spending more time running on the 1/8th mile tracks around here. The Gasser group I run with when I can, run 1/8th mile on all the tracks we hold events. It's for me more fun on an 1/8th, you get more passes, it's safer, less damage to your car, and so on. Our Studebaker National drags are on the 1/8th mile and that encourages new racers at our event to give it a try. Every year we have people that never ever ran down a dragstrip give it a try most get hooked. I run the 1/4 partly to get 1/4 mile times since some people can only relate to that, it is the traditional way to race.
Bill your doing a great job with your car I love hearing about it, please keep it up and keep us updated.
Richard
Studebaker Drag Racing You can't beat it.
The 11th annual all Studebaker Nationals Drag Race is Saturday May 25th, 2018 at 9:00 am at Brown County Dragway in Bean Blossom, Indiana. For more information contact Richard Poe
Top

Here's a pic of Fuel system upgrade recently , and a Pic with lettering on the car . 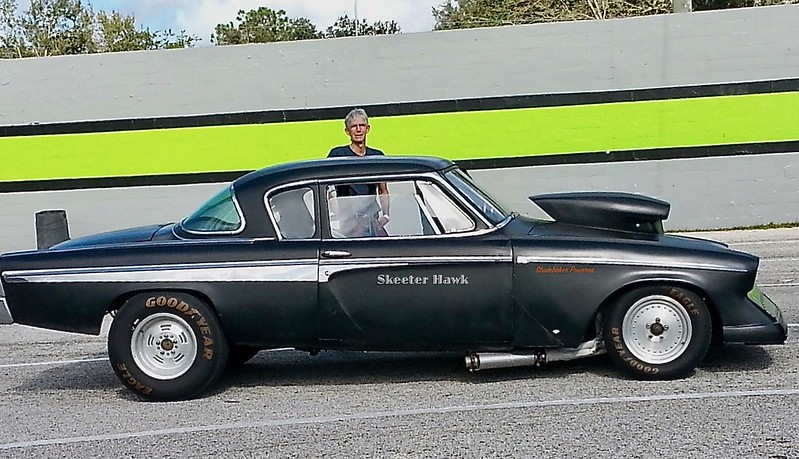 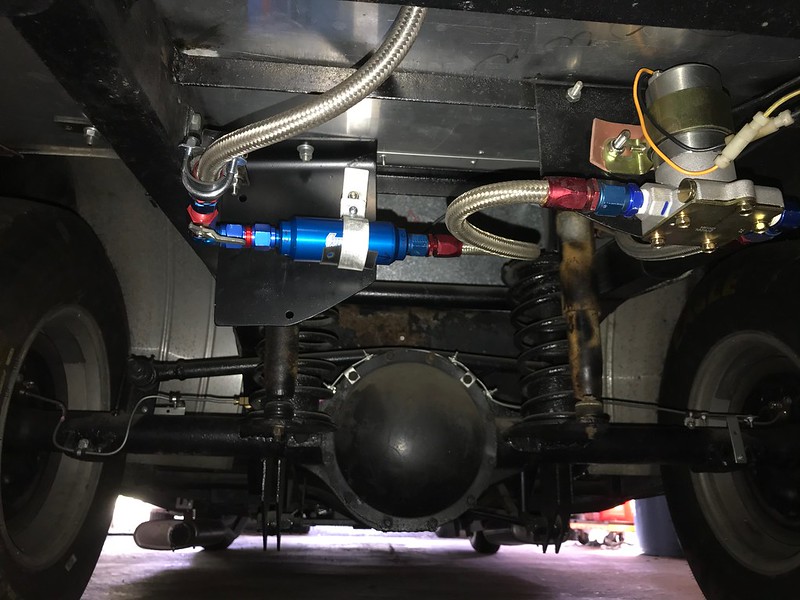 The rains came , so I did not get to track on June 6th , as hoped . I'll not run again until October , most likely , as summers are brutal for daytime racing in Central Florida . There is almost always a 40% + chance of afternoon thunderstorms anywhere inland .
However , I did go to track with a friend of mine on a Friday night race since then . We went in order to check his car out , and to let people see it , as it is For Sale .
It is a BBC , 475 cid , etc etc , and runs 8.50's at 161 in the 1/4 . All newish stuff .( We had 2 separate moderate showers while we were there .) 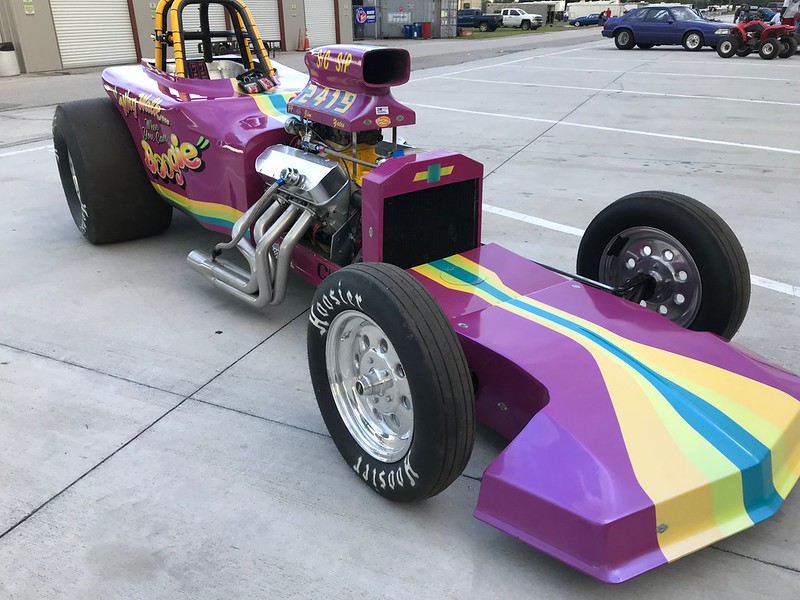 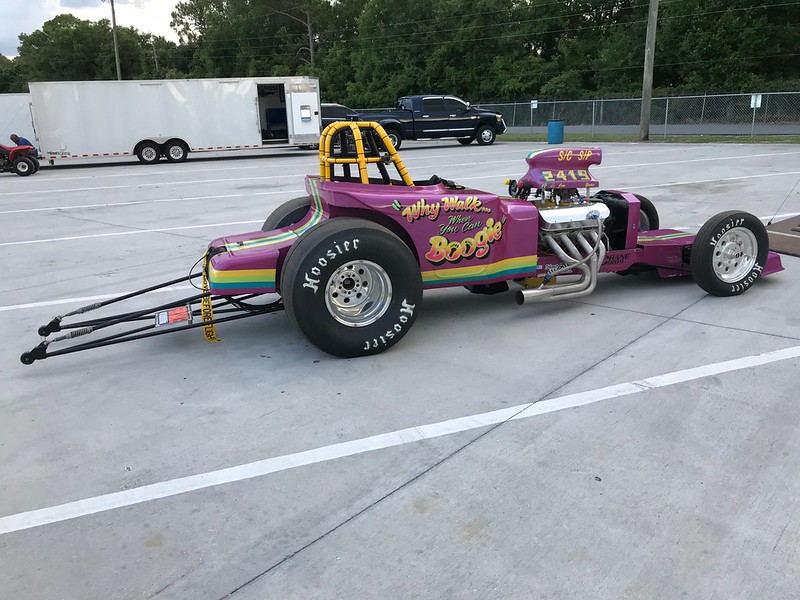 BTW ,I still want to buy a 289 crank , or short block , or whatever it takes to get a crank , somewhere within reasonable driving distance of Daytona Beach . Not desperate , but wanted .
If you can't get there in a STUDEBAKER,
it ain't worth goin' .

The older that I get , the less I can tolerate weather extremes .
This picture shows why I do not attempt to race in the Florida summer . I can only go to the track to race , in
the daytime . This temperature is actually at 5:50 AM . The air is thick as Sea Poop , or pea soup....... What a starting point......
So , bring on October !!!!!! 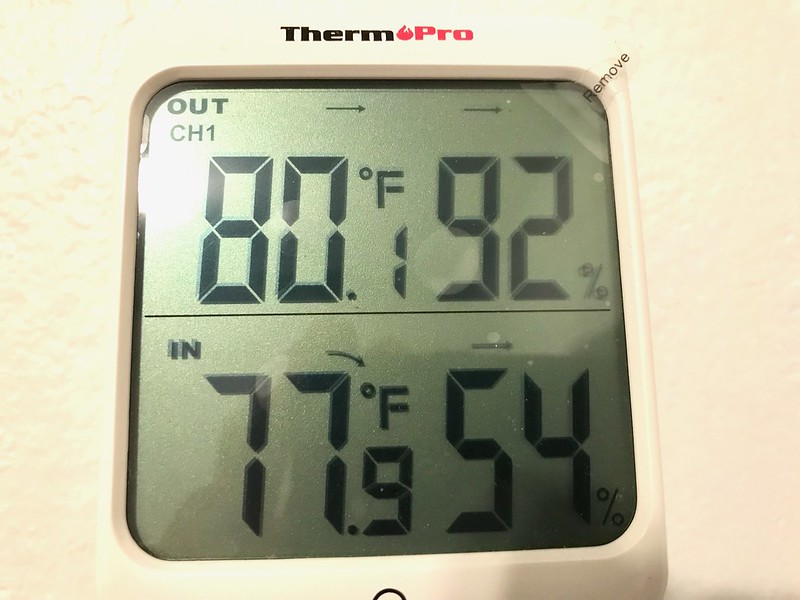